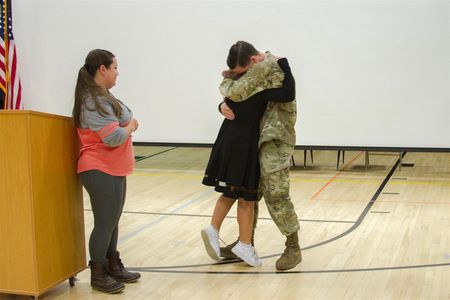 Abigail Alway, 8th grader at Woodland Middle School, was surprised during the Veterans Day assembly with the return of her uncle, Sergeant Edward Mayer II, who helped raise her

Woodland Middle School celebrated Veterans Day with a special guest, U.S. Army Sergeant Edward Marcus Mayer II, uncle to 8th grader Abigail Alway who developed a close relationship with her during her younger years. Mayer just returned home on temporary leave to attend the funeral of a relative after having been on duty for nearly three years. 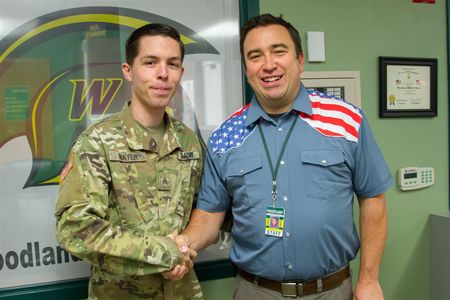 WMS Principal Dr. Russell Evans worked with Abigail’s mom, Christina Hughart, to organize a surprise homecoming for Mayer at the end of the school’s Veterans Day assembly on Thursday, November 10, 2022. Hughart reached out to Evans to see if they could arrange a surprise for Abigail, who’s uncle was very close with her throughout her childhood. Abigail had no idea Mayer was coming home on temporary leave prior to the assembly. “We were deeply honored to help Christina surprise her daughter in such a fitting way on this special holiday,” said Evans. “We organized the assembly so we could invite Abi up at the end and surprise her with her uncle.” 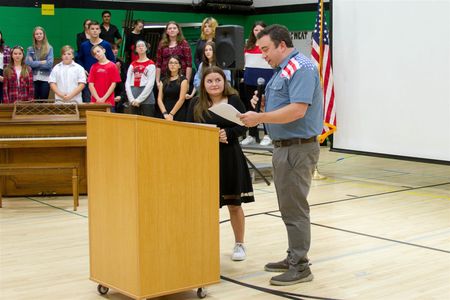 Abigail initially thought Dr. Russell Evans was recognizing her for her solo in one of the songs performed during the assembly

Hughart posted a video of the reunion along with a thank-you message to Woodland Middle School on Facebook, “Woodland Middle School was absolutely amazing and my family thanks you immensely, we were able to keep it a complete surprise,” she said. “The school helped coordinate surprising her in front of the whole school!” 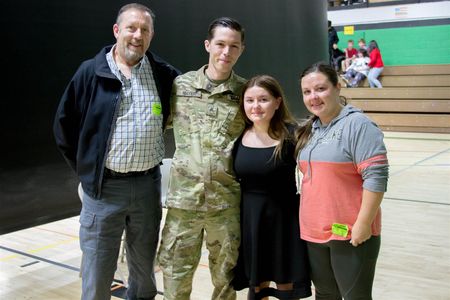 Abigail with her uncle and mother