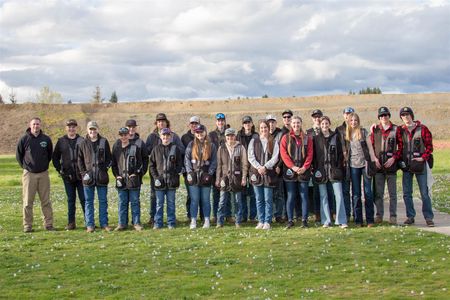 The Trap Team provides students with the opportunity to develop and hone their shooting skills while also teaching teamwork and gun safety; encouraging the competitive spirit; and helping teammates develop self-respect and confidence. For the 2021-22 school year, 24 teammates make up the team with most members from Woodland, however some also represent Battle Ground, Vancouver, and more.

Kelly Hathaway, a sixth grade English Language Arts Teacher at Woodland Middle School, and her husband Jason team-coach Woodland’s Trap Team along with the help of parents and community volunteers. “The entire experience doesn’t work without a ton of coaches since safety is paramount and we coach everyone – especially new teammates – in how to prepare and remain safe during any shooting practice or event,” explained Kelly. “At least one member of our coaching team supervises each group of shooters, and with at least three groups at each practice, our coaches work hard to ensure everyone follows all safety protocols.” 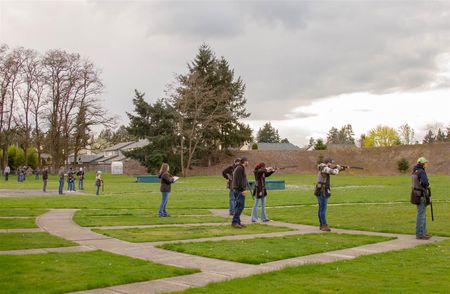 The Trap Team relies on several additional volunteer coaches to ensure everyone remains safe at all times.

With only a few different facilities capable of offering practices for trap, skeet, and clay shooting, not every school district offers a trap team. This means Woodland’s team attracts students from districts around Clark and Cowlitz counties. “While we primarily want Woodland kids involved, there isn’t the opportunity for students from other districts so our team will accept students from other schools,” said Kelly.

Many team members first familiarized themselves with firearms by hunting with their family before moving on to competitive shooting. “My older brother used to shoot with the team, and I went with him to practices and competitions,” said Aquoia Coss, a Woodland High School senior who’s been on the Trap Team since her Freshman year. “I like the whole ‘family-like’ aspect of it, and once I got used to the movement of the gun – you have to track the clay pigeons while targeting them – I really enjoy the entire experience.” While competing recently at Las Vegas, Coss ranked 10 out of 30 female competitors and attributes a lot of the team’s success to the Hathaways and the volunteer coaches, “The coaches are all great and so supportive of the team.” 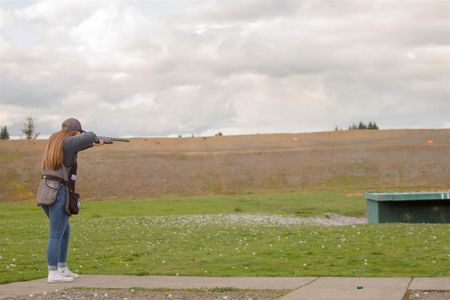 Many members of the team participate for their entire high school career with some starting even younger. Dane Hauge, a senior at Woodland, first joined the team in middle school after seeing a flyer. “I had always been into riflery, and I really enjoy the sport all-around, plus it gives me practice for duck hunting season,” said Hauge. “I’d encourage anyone who’s interested to try – it’s all basic knowledge and safety is the top priority.” Hauge plans to continue finding opportunities to participate in competitive shooting after he graduates high school this spring.

For the Hathaways, coaching the team seemed like a natural fit when the opportunity became available two years ago. “Once the previous coach’s son graduated, he thought of us and our son in sixth grade and suggested we try it out,” said Kelly. “Since we love hunting, we jumped at the opportunity to coach the team, and it’s been a great experience for everyone.”

Students interested in trying out and participating on the WHS Trap Team can reach out to Jason Hathaway via email at woodlandyouthsports@gmail.com or Kelly Hathaway at hathawak@woodlandschools.org.

Learn more about how Woodland Public Schools educates our students and serves the community, by visiting our dedicated news webpage at www.woodlandschools.org/news/wsd