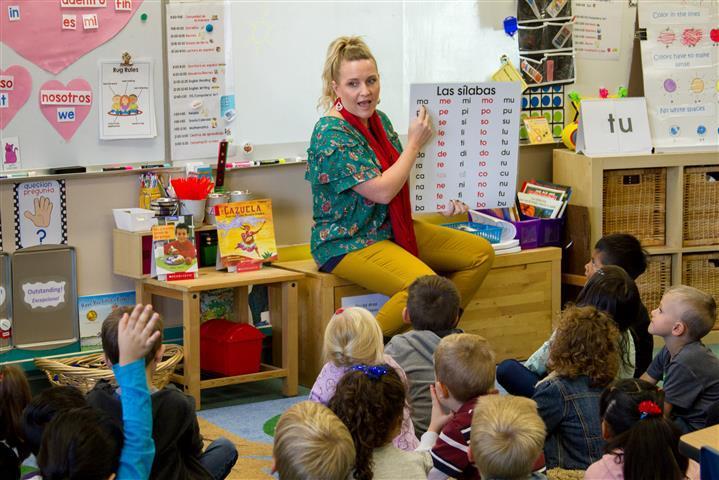 Kindergarten students in Woodland Primary School’s new Dual Language Program use English and Spanish to learn school lessons, make new friends, and positively change the entire school’s culture. Woodland Primary School’s dual language program, introduced at the beginning of this school year, uses a 50/50 model with bilingual teachers giving lessons for half of the day in Spanish and half of the day in English.

An Overview of Dual Language

Currently, the school’s dual language program serves 44 students in two kindergarten classes. The dual language program is opt-in with families electing to enroll their student in either a dual language classroom or a traditional class. “Many people might think learning two languages at such a young age would be confusing but it’s actually the opposite,” explained Woodland Primary School’s Principal, Ingrid Colvard. “By having the different physical and audio cues provided by both languages, students have even more references to associate with both their English and Spanish lessons; the cues from one language help the students understand the other.”

For half of each school day, teachers speak entirely in that time’s designated language without switching to the other language, wearing colored scarves to show students which language they will be speaking. Only students have the option of using either language if they need to express something they don’t yet know how to say in the designated language. “Fully immersing a student in a language without switching helps students learn by repetition as well as avoiding the desire to fall back to their native language,” explained Jill Thoeny, one of the school’s two bilingual kindergarten teachers.

Students can be native speakers of either language when they enroll in the program with optimal enrollment having equal numbers of English and Spanish speakers to better use a learning technique called peer modeling. “Each student is assigned a peer who’s a native speaker of the other language,” said Ingrid. “Each student helps their peer better learn their own native language while effectively learning more about both their native language and the new language at the same time.” 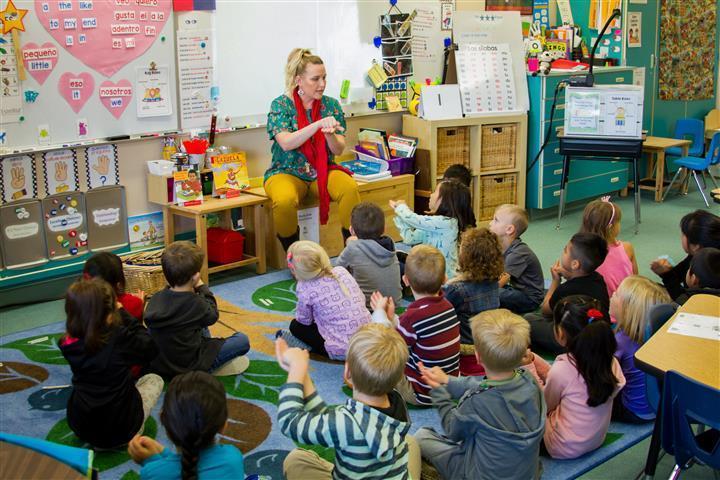 Teachers use a technique called Total Physical Response (TPR) which associates lessons with physical actions, such as making the movement of a tortoise in your hand to learn the word "tortuga," tortoise in Spanish

Teachers also use a technique called Total Physical Response (TPR) to enhance learning and improve students’ language development. “Studies show that students – especially young students – learn faster when a physical action is associated with the lesson they’re learning,” said Ingrid. “For each element of a lesson, the teachers demonstrate a physical action for the students to copy so students can connect the lesson with that action.”

While learning animal vocabulary in a recent lesson, students made a fist rotating in their other hand to simulate the movement of a tortoise – “tortuga” in Spanish – and spoke the word aloud to music. “The more students connect a letter or word to a physical action, the more they recognize and retain that word,” said Jill. “Even the music played in the background during class activities is chosen intentionally to use sounds and words the students have been learning during the lesson.”

The Benefits of Dual Language Learning

The long-term benefits of dual language learning reach beyond becoming bilingual, and Woodland Public Schools has committed to providing the program to enrolled students at least to fourth grade. “Studies show that students enrolled in dual language programs see academic gains beyond their single-language peers in all subject areas, not just language arts, beginning in third grade,” explained Ingrid. “When a district implements a dual language program, it’s imperative that everyone involved – both staff and families – remain committed to the program for the long-term in order for students to benefit.” 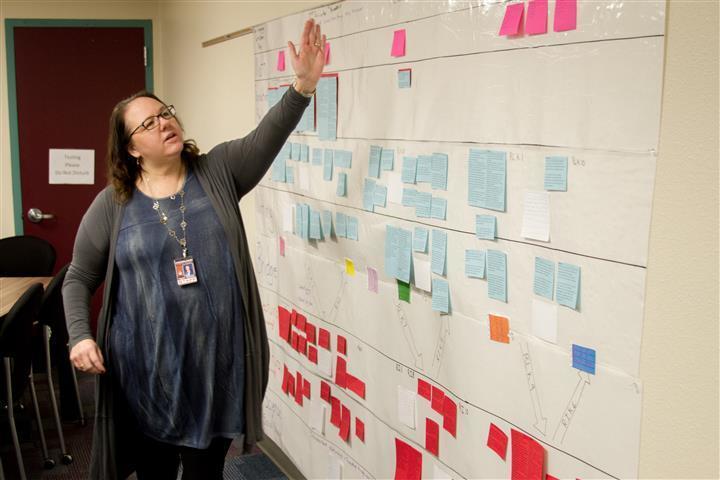 Woodland Public Schools introduced the program to help address the increasing diversity of the community’s population. “More than 25% of the primary school’s entering kindergartners cannot speak English,” said Ingrid. “In an effort to more effectively work with our Hispanic population, I’ve been learning Spanish, too.” The dual language program received enthusiastic response from the community nearly immediately. “We didn’t need to actively recruit any students; we received the exact number of applicants we needed,” said Ingrid. “Our native Spanish-speaking population was so supportive – they really wanted the district to introduce a dual language program like this.”

Shortly after the school year started, Woodland Public Schools received a $34,000 grant from the state to help the school buy teaching and learning materials to enhance the dual language program’s curriculum. “What we can do with this kind of funding in our first year is absolutely huge,” said Ingrid. “The grant’s going to make a big difference as we will be able to buy more bilingual learning materials to provide additional resources to our students.”

In addition to funding support, the school has been working closely with other districts throughout the state who provide immersion programs including Evergreen Public Schools. “We have received significant support from other districts through site visits and guidance,” said Ingrid. “Collaborating with other schools helps all the districts involved improve their immersion programs through teamwork and strategy development.”

Woodland Primary has already started seeing big changes from the new program. “Before we started, our native Spanish-speaking kindergarten students took a great deal of time feeling comfortable enough to speak during class,” said Ingrid. “The program has changed the entire culture of our school – students aren’t afraid to play with others who don’t speak their language, and students see the staff trying to speak multiple languages which shows how we’re all learning new things, students and adults alike.”

Jill agreed with Ingrid, “For our native Spanish speakers, hearing their home language used around the school brings a great deal of comfort,” she said. “We want to make honoring languages something that lives every day throughout our school; we see our Spanish-speaking students smiling and feeling okay using a language their friend might not completely understand because their language is visibly accepted here.”

Anahisse Hodge, the school’s other bilingual kindergarten teacher, has started seeing the effects the dual language program has on students not enrolled in it. “We hear students not in the program asking their friends how to say different words in Spanish and then trying to learn the words themselves,” she said. “It’s only been a month and a half and students are already using Spanish everywhere!”

In addition to the students, staff members see a difference in the families of native Spanish speakers. “Families of Spanish-speaking students are feeling empowered by the program and are attending school activities in greater numbers than they did previously,” said Ingrid. “We’re incredibly excited to see this kind of response.”

The background of the kindergarten teachers teaching dual language is nearly as diverse as the program itself. Jill, a Woodland native, got her first taste of the needs of bilingual students when she used an elective while attending high school to help student-teach at the primary school. “I realized at that point that I had to learn Spanish to be a more effective elementary school teacher,” she said. “After teaching in immersion schools in Oregon and Spanish-speaking schools abroad, I knew I needed to bring that experience with me when I came back to Woodland.”

Anahisse started school in Oregon as a native Spanish-speaker who didn’t know English. “When I attended kindergarten, I was told I couldn’t speak Spanish at school even though that’s all I knew,” she said. “Eventually, I became so immersed in English that my mom couldn’t speak with me anymore.” Anahisse’s parents emphasized the importance of keeping up her ability to speak and write in Spanish. “Since I didn’t learn the proper way to read and write Spanish at school, my mom helped me learn at home; my experience made me realize what so many of our Woodland parents experience in their own homes.”

Families interested in enrolling their students in the program don’t need to be bilingual themselves and students do not need to have any prior knowledge of their non-native language. Additionally, there are no screening criteria for students to enroll – all students are eligible. Applicants are accepted in the order of their application date and the district has a designated lottery-system should the number of applicants exceed the number of available classroom spots.

Although there is no additional cost to enroll, parents and guardians must remember that the true benefits from a dual language program involve a long-term commitment and should plan for their student to continue enrollment in the program for the grades following kindergarten, too.

If you would like to subscribe to receive Woodland School Weekly stories in your email, simply click this link . You can unsubscribe at any time, and Woodland Public Schools will not share your email address.