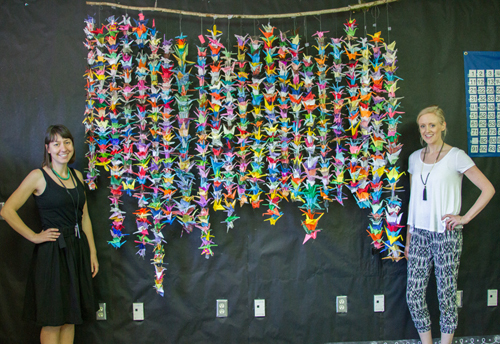 When one of their own third-graders suffered a life-threatening medical condition and underwent surgery, the entire staff and all of the students at Woodland Intermediate School rallied to provide support and inspiration by creating 1,000 origami paper cranes by hand, raising donations, and holding special assemblies.

While at home in April, Woodland Intermediate School third grader Harley Gatica complained about a headache and suddenly passed out. His parents called 911 immediately, and an ambulance rushed Harley to a nearby hospital where he was diagnosed with a bleed in his brain requiring life-threatening surgery.

Harley's classmates and teachers knew that helping him stay in good spirits could lead to a speedier recovery. "It's been a school-wide team effort to rally for Harley," said Megan Lascik, his third-grade teacher. "I recently saw a play about 'Sadako and the Thousand Paper Cranes,' and thought it could be a great project for the school to create 1,000 paper cranes to show our support for Harley."

Harley's teachers were inspired by the story of 'Sadako and the Thousand Paper Cranes.'

Sadako Sasaki was a two-year-old girl living in Hiroshima when atomic bombs fell near her home. Although she survived the blast, she developed leukemia from the radiation. Sadako was inspired by a Japanese legend telling how if someone created a thousand origami cranes, they would be granted a wish, and went about folding more than 1,4000 cranes. "Megan and I agreed that this project could be a way for the school to show Harley how much he means to all of us," explained Carlotta Prospersi, Harley's English Language Learner (ELL) teacher. "The entire school learned how to fold the paper cranes, and we presented Harley and his family with all 1,000 of them mounted on a special display."

At a recent assembly, Principal Steven Carney took a panoramic photo of all the school's students wearing hoodies and shorts, Harley's preferred attire

In addition to making paper cranes, the school collected funds and other donations for Harley throughout the remainder of the school year. At a recent school assembly, students wore shorts and hoodies, Harley's favorite attire, and Principal Steven Carney took a panoramic photo of all the students cheering for Harley's return.

Harley has recovered from his injury and plans to return to school this fall. "Each of our students is a member of our school family," said Carney. "As an entire school, we strive to show every student how much they mean to us, and incidents like this demonstrate how close our staff and students are to one another – it's an incredibly touching experience."