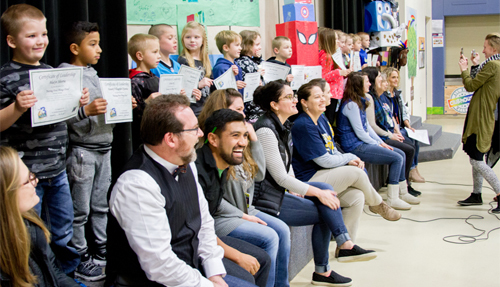 “We want to keep behavior and academic growth at the forefront of our students’ minds, and BRAG does just that,” explained Staci Aschoff, Leadership teacher for Woodland Intermediate School. “By celebrating their success, the BRAG program gives students tangible incentives to perform well in and out of school both academically and in terms of behavior.”

Each month, the entire school studies a new character trait or habit including learning how to incorporate the trait into their daily lives. In January, students learned the importance of prioritizing important work, such as schoolwork, homework and chores, over playing games or enjoying recreational activities with a lesson called “Put First Things First.”

Throughout the month, teachers award BRAG points to students when they demonstrate principles of that month’s trait, other good behavior, and for academic growth. Teachers also give students special BRAG tags when they earn enough points.

The staff divides the student body into teams identified by colors including students from each of the three grades to compete on receiving the most BRAG points throughout the month as well as in special project competitions. In January, teams built Native American totem poles inspired by their studies. The winning team created a totem pole representing the world, its continents and its many cultures.

Students form teams to compete in monthly academic competitions. January's winner made a totem pole featuring the different continents and cultures from around the globe.

The staff also tracks overall student attendance, awarding students with certificates for perfect attendance at the end three-month cycles. The school posts the previous day’s attendance statistics on an outdoor sign where students get dropped off and picked up to instill the importance of good attendance for both students and their parents.

Student attendance is vital to academic growth so the school awards special certificates to students who maintain perfect attendance over a three-month period (like Maelee Nichols, pictured here with her dad).

At the end of each month, the school holds a special assembly to review what students learned throughout the month and to award certificates recognizing good behavior, academic growth, and perfect attendance. Family members are invited to attend to celebrate with their students, take photos, and watch a few friendly competitions with teachers and students joining forces to compete. January’s competition featured a race where a blindfolded student had to push a teacher sitting on a scooter who guided the student using vocal directions.

The assemblies feature team competitions like January's with a race where a blindfolded student had to push a teacher across the gym guided by only the teacher's vocal directions.

Results have been outstanding. “Our Positive Behavior, Intervention and Supports (PBIS) team came up with the idea last year, and decided to use it as a schoolwide motivator,” said Aschoff. “The program has been hugely successful – students love earning BRAG points and excel both academically and behaviorally to get their BRAG tags!”