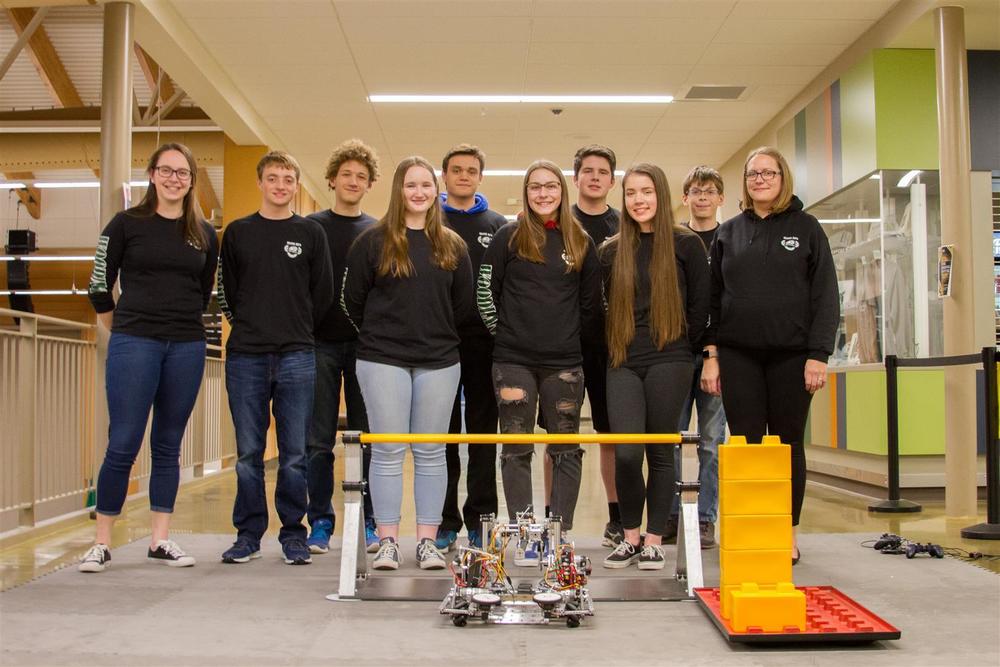 Woodland High School’s robotics team, the Beaver Bots, won an Inspire Award and qualified to compete in the State Finals on Sunday, January 26, 2020. The Beaver Bots are one of 140 teams at high schools across Washington State taking part in the For Inspiration & Recognition of Science & Technology (FIRST) Robotics Competition.

However, when Talvitie volunteered, she had no prior experience with robotics or computer programming. “I’m a big fan of LEGO and although that’s not part of the high school level robotics competition, I was very interested in robotics and being part of the only STEM club offered at the high school,” she said. “Steve Rippl, the district’s IT director, was instrumental that first year helping get the club off the ground by teaching us how to code.”

Now, the students manage all of the team’s responsibilities. “My role now is to serve as a facilitator and to ensure everyone tracks their work, a key task in the competition,” said Talvitie. “Our students have learned so much that they handle all of the other elements – building, programming, and project management.” 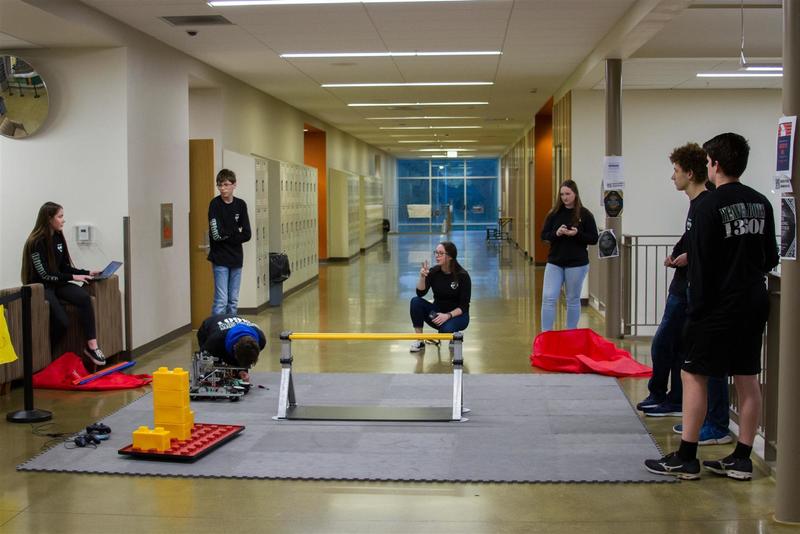 Teamwork and effective communication between the three subgroups are essential for the team's success.

FIRST kicks off each year-long season with a different theme including detailed tasks and a list of specifications what parts teams can use to build their robots. This season’s theme was called Skystone. In a timed match of 2-1/2 minutes, teams had to program their robots to travel autonomously from a starting point to pick up building materials, blocks called “stones,” and then transport the blocks to a building area. Once in the building area, two human operators controlled a second robot to construct a building. Elements from the task such as number of blocks moved, building height, successful autonomous travel, and more, are assigned points with the highest-scoring team winning the match.

Once the team divides itself into the three groups – builders, programmers, and project managers – they start each season by brainstorming ideas for the robot and drafting starting designs using the specifications provided by the FIRST League’s organizers. Communication and teamwork between each of the three groups leads to the success of the team as a whole. “While it can be hard to get everyone to agree, everyone’s really supportive of one another,” said Adelia Menn, a junior who’s been involved in Woodland Public Schools’ robotics programs since the eighth grade. “I think it’s nice how everyone has different strengths and weaknesses and we work as a team to help one another out.”

Following the initial planning stages, the builders create the robot, making modifications as needed along the way. The programmers use a graphical programming language along with additional code to program all of the different elements of the robot which may include a variety of engines and moving pieces such as arms, claws, or legs. Programmers must also create artificial intelligence for the robot to allow it to move autonomously without human interaction for part of the competition.

The project managers create and maintain the Engineering Notebook which includes compiling all of the building plans, tracking any design changes, and maintaining the team’s budget along with ordering parts and documenting receipts. The Engineering Notebook is judged during the competition with judges scrutinizing the notebook for the current project as well as an included plan for how to keep the club going in the future. 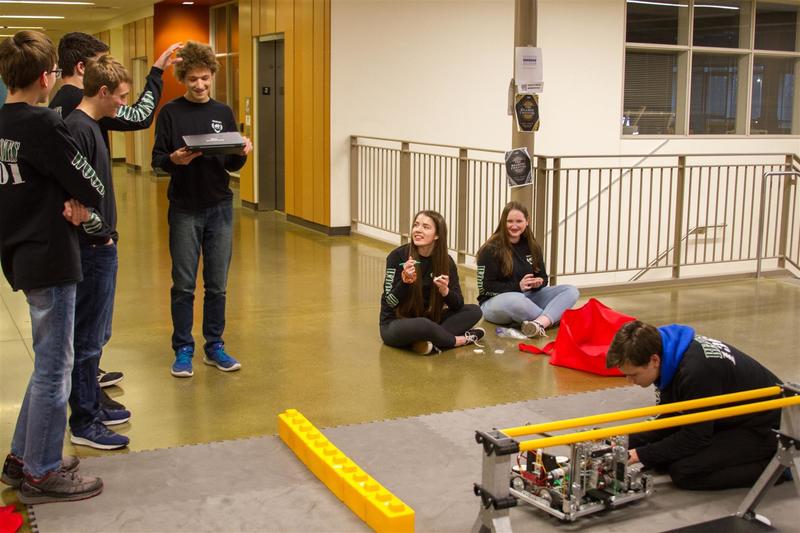 Programmers, Builders, and Project Managers work closely together to create, program, and document a successful robot.

At each competition, the concept of teamwork broadens beyond a single team, as teams form alliances with a second, different team for each of five matches. For each match, two alliances, a total of four teams per match, compete against each other, however, since alliances change with each match, teams that partner in one match might be competitors in the next. “The focus on changing teamwork creates a dynamic where teams are constantly analyzing all of the teams’ robots to determine the strengths and weaknesses of each,” explained Talvitie. “During a match, all 15 team members from both teams in an alliance work together to make sure their robots work together to complete the task successfully.”

This year, the Beaver Bots won an Inspire Award for their work on their Engineering Notebook with judges focusing on their plan for the future, in particular, and also won third place for their robot design in interleague competition. “The judges were impressed with how organized our team was, particularly with the team’s sustainability plan to keep the program going,” said Talvitie. “The team really wowed the judges.”

Since the robotics club needs new kits, specific parts, and entry fees each year, a plan for sustaining the club both economically as well as attracting new members is instrumental for the club’s future success. “As a team, we have to create a sustainable business model including ways to generate funds for our team each year as well as plans for outreach to recruit new teammates,” explained Ruby Heidgerken, a junior who has been participating with Woodland Public Schools’ robotics programs since seventh grade. “The robotics team needs a lot of funds so developing partnerships with local businesses and thinking of fundraiser ideas is key to a successful ongoing program.”

In addition to participating as a project manager for the Beaver Bots, Heidgerken also plays for Woodland High School’s volleyball team, but she’s not the only robotics teammate who’s also a student athlete, far from it, in fact. “Half of our robotics team is made up of student athletes,” she said. “In addition, half our team is girls which makes the robotics team incredibly diverse.”

Juggling multiple extracurricular activities can be challenging, but, for Heidgerken, timing was everything this season. “The robotics team had a lot of turnover for project managers this season since maintaining the Engineering Notebook can be quite time-consuming,” she said. “Fortunately, the volleyball season ended right when the needs of the robotics team ramped up.”

By starting with the Woodland Middle School robotics club, Heidgerken discovered a love for science at a young age, specifically astrophysics, a field she intends to major in at college. “I’m currently in the Western Aerospace Scholars program with the Museum of Flight; I just find everything about space and the field of astrophysics so interesting,” she said. “My goal school is Harvard because they have the leading program, however I’m also looking at the University of Colorado Boulder and the University of Washington.”

Heidgerken encourages students – both classmates at a high school but also those in middle school and younger – to get involved with computer programming as early as possible. “Learning coding is huge when you’re young because so many industries depend on it,” she said. “One of the reasons for the outreach program is to teach people about STEM and how vital it is to prepare for life after high school.”

For community members interested in learning how to support the Beaver Bots, you can contact the team at their email address: whsroboticsteam@woodlandschools.org. The Robotics Club and STEM classes offered at Woodland High School are just a few of the many programs and activities funded by local levy dollars and the Woodland community’s ongoing support of their schools.