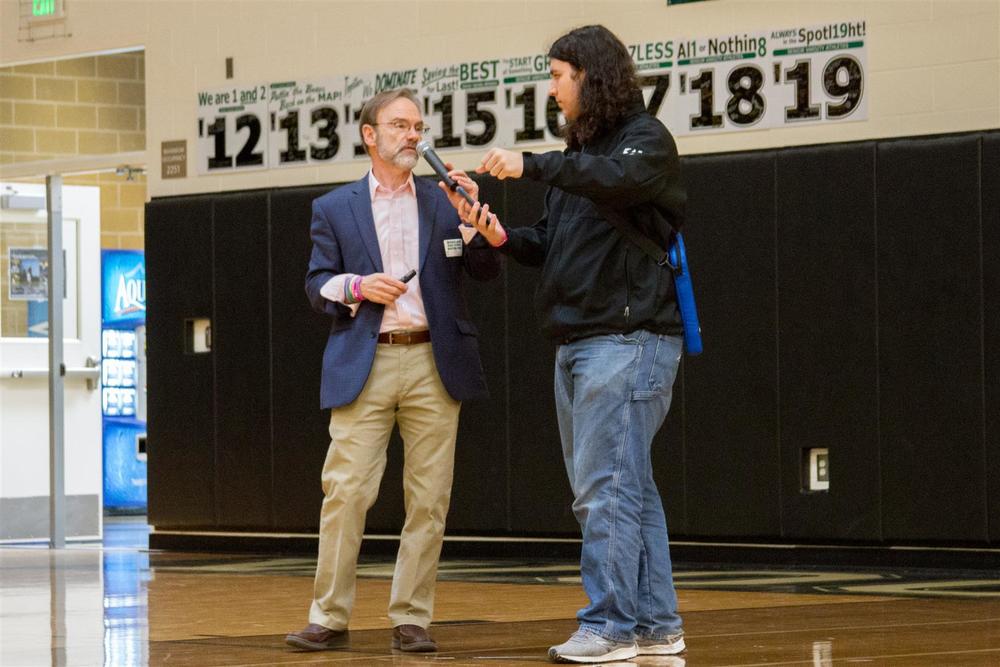 Students at Woodland High School learned the dangers of distracted driving and how they could help prevent fatal accidents for both themselves and others during a special presentation by Joel Feldman, the co-founder of End Distracted Driving (EndDD.org) whose 21-year-old daughter was killed by a distracted driver while crossing the street in 2009.

Feldman started the presentation by describing himself as a “recovering” distracted driver. “I used to check my email and answer phone calls while I drove,” he explained. “As a driving society, our philosophy seems to be: ‘No one else can handle distracted driving but I can.’”

Feldman asked the students to raise their hands if they had been a passenger in a car with a potentially drunk driver in the past month. Almost no hands were raised. He then asked how many students had been in a car with a driver who used a cell phone while driving in the past month and nearly every hand shot up, “Drunk driving isn’t socially acceptable, however, this doesn’t seem to be the case with distracted driving,” Feldman pointed out. “As a society, we need to change that perception.”

In 2017, nine percent of fatal crashes were reported as distraction-affected crashes resulting in 3,166 people killed, according to a study by the National Highway Traffic Safety Administration (NHTSA) released in April 2019. The National Safety Council (NSC) found that distracted driving crashes are under-reported and the agency estimates that cell phone use alone accounted for 27% of car crashes in 2015.

Current studies show even worse results for younger drivers. “Current studies estimate 15-20% of car crashes are a result of distracted drivers, however, the number skyrockets to 60% of crashes caused by distraction when studying drivers who are 16-19 years of age,” said Feldman. “The studies show that there’s no question as to how dangerous distracted driving is, especially to new drivers.”

Students then watched a video captured of a public bus driver in Quebec, Canada who was reading, organizing paperwork, and even filling out forms, all while driving the city bus. Feldman asked students to share their reactions. “I don’t understand – it looks like the guy’s filing his taxes,” one student exclaimed. “Why would you do that while driving a bus?”

Traffic laws against using a cell phone while driving like those passed in Washington and Oregon seem to have little impact on the amount of distracted driving. “When we make it about respect, the messages have more impact since taking your eyes off the road that you’re sharing with other people simply isn’t respectful,” said Feldman. “We need to realize that we shouldn’t drive with distractions out of respect for other people – both those in our cars but also the other drivers and pedestrians around us.”

Feldman taught students how car crashes are the leading cause of death for people up to the age of 24. He then shared the story of his daughter, Casey Feldman, who was killed in 2009 at age 21 when, while crossing at a street in a crosswalk, was hit by a car whose driver wasn’t paying attention because he was checking his GPS unit. “I was so mad at the driver until I realized that I used to text and check my email while driving,” said Feldman. “This driver wasn’t even using a cell phone, he was just distracted for a few seconds while he reached for his GPS unit and those few seconds of distracted driving changed lives forever.” 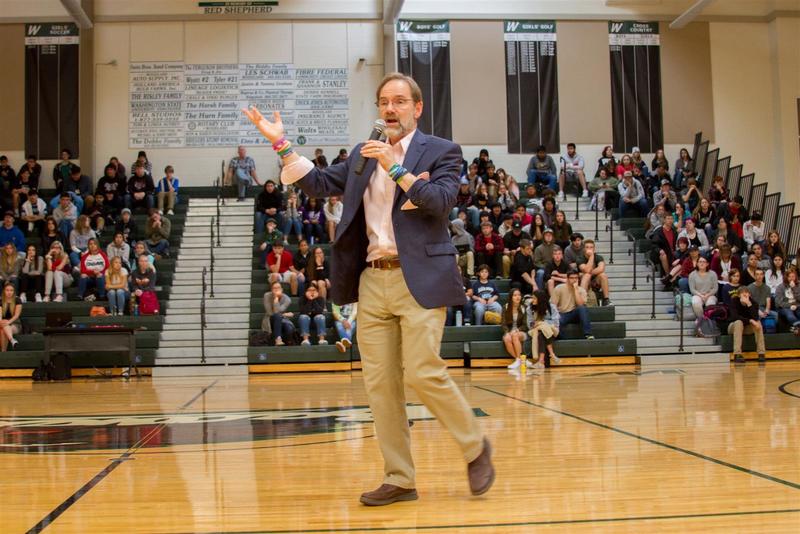 Joel Feldman, whose own daughter was killed by a distracted driver, wears bracelets in memory of all the children parents have lost to distracted driving car accidents.

Feldman rolled up his sleeves to show both his wrists wearing wristbands up to his elbows. Those wristbands were made by parents who lost children in car accidents resulting from distracted driving. “Parents ask me if I can wear their wristbands during my presentations in order to remember their kids,” he said. “I have even more at home as there are too many to wear at the same time.”

Students watched a video of a 20-year-old driver who turned to look in her backpack and drove her car into a pedestrian as he was crossing the street. Students gasped at how the driver didn’t even slow down when she hit the pedestrian. The pedestrian survived but is still recovering from a serious brain injury. “The police reported that even after she hit the pedestrian, she kept saying ‘I’m a safe driver – I’ve never been in a crash,’” said Feldman. “Unfortunately, people assume that since they haven’t been in a crash that they’re a good driver, but just because we haven’t been in an accident today doesn’t mean we won’t be in one tomorrow.”

Feldman pointed out that there are many ways to be distracted while driving including eating, programming a GPS unit, texting, emailing, or just talking on the phone. He explained the difference between manual, visual, and cognitive distractions:

“Cell phone use – particularly texting – is especially dangerous because it involves all three types of distraction,” said Feldman. “A study by the University of Utah showed that just talking on a hands-free cell-phone makes drivers as impaired as driving while intoxicated at the legal blood-alcohol limit of 0.08%.” He showed students how to enable the automatic “Do-Not-Disturb” feature on Google Android and Apple iPhones, a feature that detects when the user is moving in a car and automatically blocks text and application notifications until they’ve arrived at their destination. 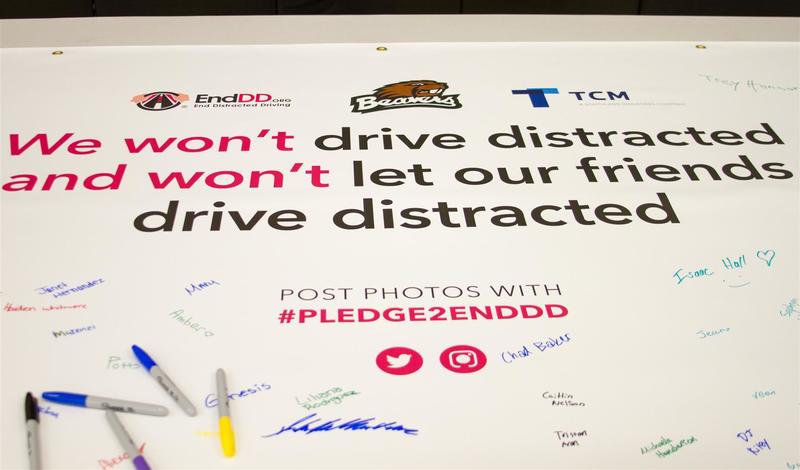 To reduce distracted driving with their friends, Feldman encouraged to students to be honest when they ride in a car with a distracted driver by asking them to put down the distraction. “Studies show that 78% of teen drivers say they wouldn’t text and drive if a friend told them it was wrong,” he said. “90% would stop texting while driving if a friend in their car asked them to.”

Feldman taught students the value of using “I” statements – statements that talk about the speaker’s own feelings and concerns about being driven by a distracted driver – rather than using “you” statements where a passenger would tell a driver what they were doing was wrong. “Just asking a driver to stop allowing themselves to be distracted might seem small, but it shows how having respect for others can make a difference,” he said. “By simply asking others to respect us and those around them, we can all make a difference.” 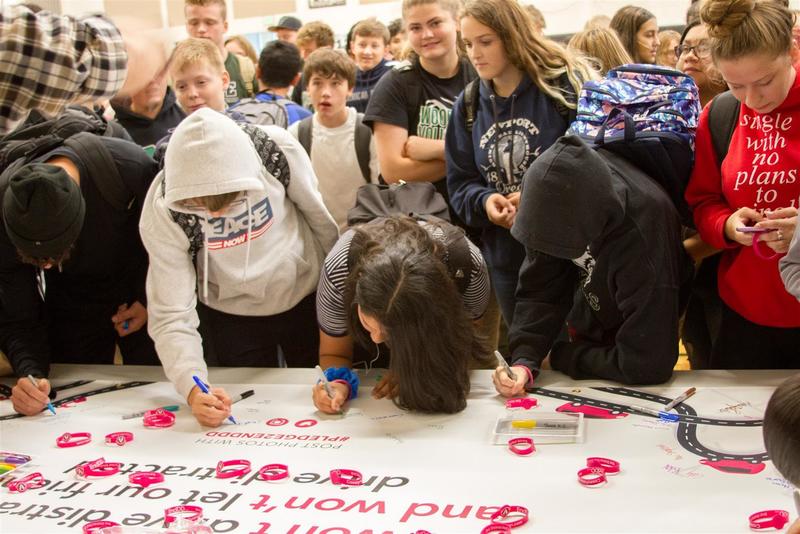 After the presentation, WHS students lined up to sign a banner pledging not to drive distracted.

After the presentation, students received pink bracelets in memory of Casey Feldman and lined up to sign a banner pledging to not drive distracted and to not let their friends or families drive distracted, either.

Joel Feldman and his wife, Dianne Anderson, founded the Casey Feldman Memorial Foundation and started EndDD.org to end distracted driving. Volunteer speakers from EndDD have given presentations to nearly half a million students across the United States at no cost to schools. To learn more including how you can help and donate funds, visit their website www.enddd.org.


If you would like to subscribe to receive Woodland School Weekly stories in your email, simply click this link. You can unsubscribe at any time, and Woodland Public Schools will not share your email address.