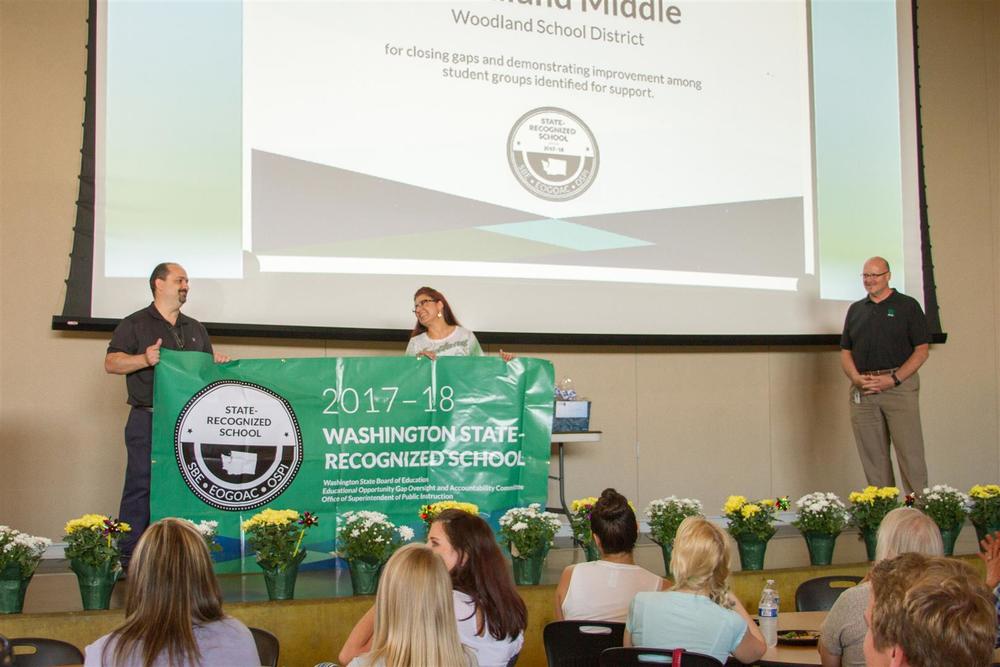 Woodland Middle School was selected to receive a State Recognized School Award from the Washington State Board of Education (SBE), Office of the Superintendent of Public Instruction (OSPI) and the Educational Opportunity Gap Oversight and Accountability Committee (EOGOAC) during the inaugural year of the state’s new recognition system.

Woodland Middle School received the award as a result of demonstrating substantial improvement with low-performing student groups during the 2017-2018 school year. Out of the more than 350 middle schools throughout Washington State, only 34 were recognized to receive State Recognized School awards which were presented during assemblies on June 6, 2019 in both Olympia and Spokane.

“We are excited about this new approach to school recognition, which is designed to identify schools throughout the continuum of support,” said Kevin Laverty, Chair of the State Board of Education. “Recognized schools are in the top 20% on multiple measures and are closing achievement gaps or have all student groups achieving at a high level. Every school which earned a State Recognized School distinction this year should be very proud of their students and their staff.”

During Woodland Public Schools’ annual year-end staff celebration, Superintendent Michael Green presented Woodland Middle School’s Principal, James Johnston, with a special banner and plaque provided by the state to display in the school’s commons area. “The teachers, staff and students of Woodland Middle School should be incredibly proud of their hard work and efforts paying off,” said Green. “This award demonstrates the incredible dedication of all of Woodland Public Schools’ staff to provide an excellent education for our community’s children.”

Why did the state replace the Washington Achievement Awards?

In 2018, the SBE, OSPI and EOGOAC agreed to suspend the existing recognition system for one year to revisit and redesign the approach the state takes to highlighting different Washington schools and districts. “The now outdated Washington Achievement Awards were based on measures, some of which are no longer computed, that tended to be highly correlated to a school’s Free and Reduced Price Lunch (FRL) rate resulting in many schools with lower-than-average FRL rates receiving multiple awards,” reads the state website. “The SBE, OSPI and EOGOAC all agreed that a change was needed.”

How are schools selected to receive State Recognized School awards?

The new approach to recognition recognizes schools making gains in targeted areas as well as those on a path toward overall improvement in achievement and growth. By using three different pathways to recognition, the state seeks to identify schools serving as exemplars of growth and achievement.

The three pathways include:

To see the list of schools receiving School Recognition Awards or to learn more about the new school recognition system, visit the State Board of Education’s website: http://sbe.wa.gov/ourwork/acco...