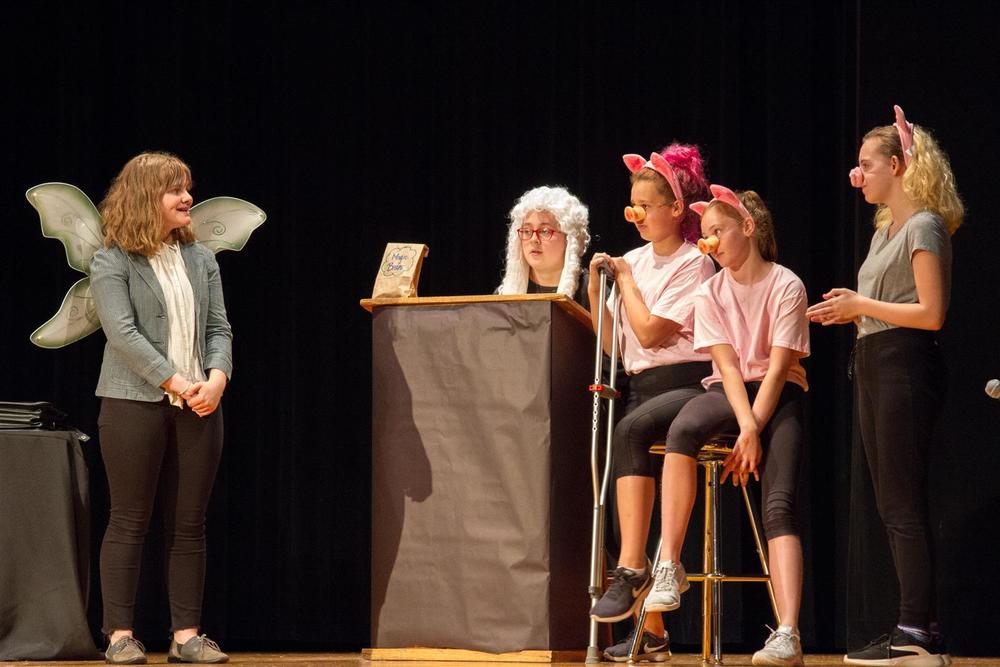 Drama students at Woodland Middle School performed the school’s first play in more than five years in May, ‘Big Bad,’ a courtroom drama depicting the trial of The Big Bad Wolf, a character in many fairytales, with characters from other stories providing witness testimony. The play involved a cast of sixth through eighth graders directed by Ronda Oathes who teaches the new drama class which started at the beginning of the school year.

Oathes, a seventh-grade English teacher at Woodland Middle, has always been interested in offering drama at the school which resulted in the formation of an afterschool club. “I’ve wanted to put on a play since I first started teaching in Woodland, so when the school was looking for additional extracurricular activities for our students, I suggested a drama club,” she said. “At first, I thought we might have a handful of students, but then 42 signed up!”

The popularity of the club led to a full drama class offered as an elective. In order to prepare for the class, Oathes earned her teaching endorsement for drama. “I’ve been involved in drama throughout my life, so spending five months preparing for the certification went pretty quick,” she said. 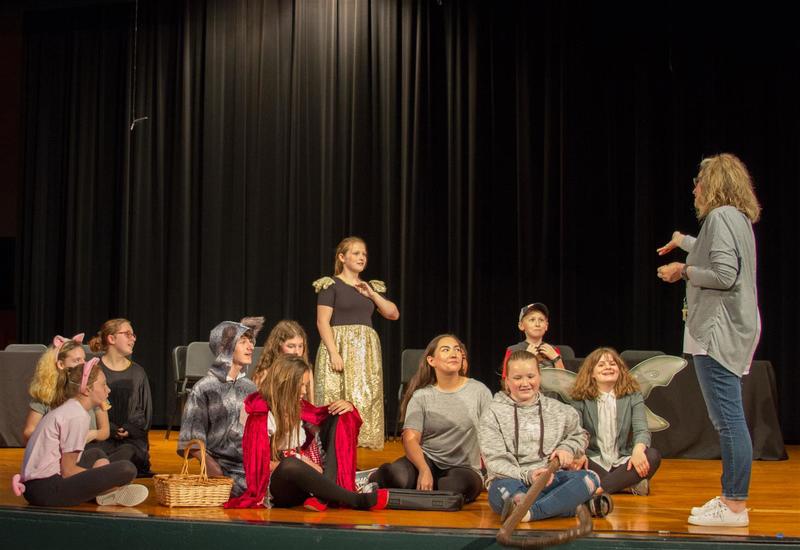 Oathes teaches students the foundations of performance including improvisation, characterization and how to become comfortable playing a part in front of an audience without laughing or breaking character. “I start by having students sit at a table and try acting out their parts while reading from a script,” she said. “Acting from reading a script is much different than simply reading aloud during class; students have to learn to embellish and express how a character might act.”

During the course, students learn the importance of reacting to other actors as well as how to improv, creating new content as a character right in the moment.  During one activity called “Freeze,” two students improv a scene with the rest of the class observing. When another student comes up with an idea, they yell “freeze!” and take the place of one of the actors to act out the new improv. “I’ve been pleasantly surprised by how willing the students are to try anything and improve their acting skills,” said Oathes. “I’m regularly developing new activities to encourage these budding actors to explore different ways to express their characters.” 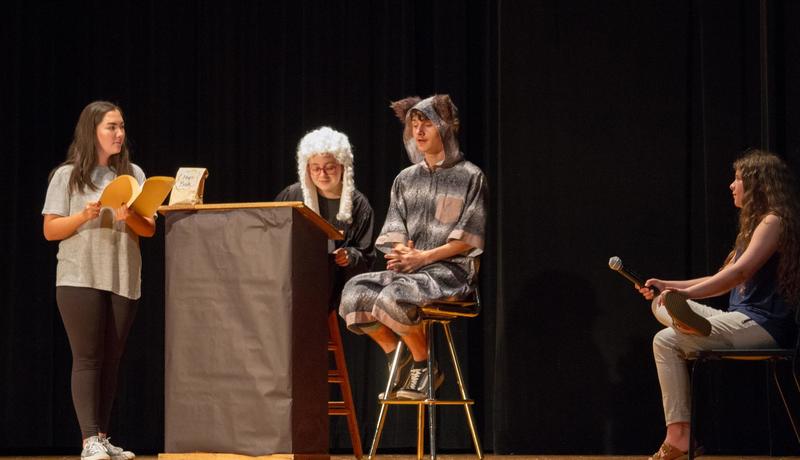 'Big Bad' depicts the trial of The Big Bad Wolf complete with an absent-minded judge, wry attorneys, and an on-the-scene news reporter.

The course’s success led Oathes to organize and direct the school’s first play, ‘Big Bad,’ since the middle school transitioned to the old Woodland High School Building in 2015. Students in both the drama class and the afterschool drama club gave several performances for parents and community members in May. “I’ve always wanted to be an actress,” said Emme Gola, a seventh grader who played the attorney for the Big Bad Wolf. “When I was younger, I was super shy, but I discovered that acting is a great way to meet people with similar interests so I started coming out of my shell.”

Savannah Doughty, a sixth grader who played Little Red Riding Hood, signed up to participate after acting in plays since three years of age. “I like using exaggeration and movement to reach the whole audience,” she said. “Mrs. Oathes is really nice – she also happens to be my neighbor so I know her really well.”

Calista Conder, a sixth grader who played a journalist reporting on the trial, agreed with Doughty. “For me, my biggest challenge is keeping my excitement under control and managing my energy level, and she said. “Mrs. Oathes is incredibly patient and gives you the time to get it right if you make a mistake.” 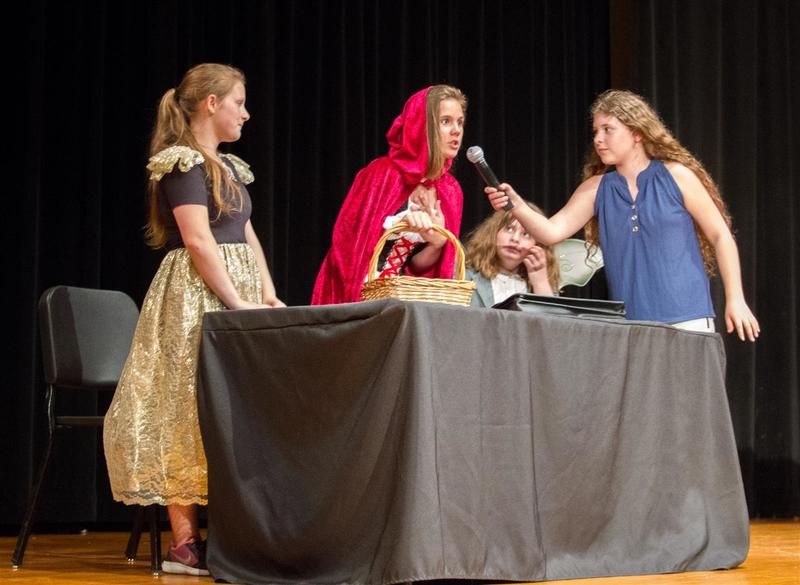 Acting and performing can present a big challenge for introverted students who often shy away from speaking in front of large groups. “I balance stage work with in-class assignments so I can reach both introverted and extroverted students,” said Oathes. “We study the history of acting starting with how basic storytelling evolved over time followed by Roman and Greek theater, Shakespearean plays, and continuing all the way to vaudeville and the development of modern performance.”

For Keegan Strom, an eighth grader who played the title role as the Big Bad Wolf, acting was something he always wanted to do, but he knew he would need to overcome his fear of speaking in front of audiences. “I have a passion for drama and really like learning different characters, adding to them as I practice,” he said. “I used to get pretty bad stage fright, but the more practice I have talking to larger groups, the more I get used to it.”

Other students signed up for drama to help develop presentation skills for their other classes. “I always like performing in band, but I wanted to get better at speaking in front of people,” said Caitlin Nelson, an eighth grader who played Little Red Riding Hood’s grandmother. “I like exploring different characters like Grandmother Hood where I have to act the way a grandmother would.”

For Oathes, her greatest satisfaction comes from watching her students develop their newfound talents, “I really love watching the kids come out of their shell and then nailing their performances,” she said. “There’s a lot of pride that comes from watching their confidence grow to the point where they own their performances by adding quirks and mannerisms to their characters.”